Is the Australian property market headed for trouble?

Is the Australian property market headed for trouble?

While most Australian property markets are enjoying the spoils of enormous price growth, especially in Sydney and Melbourne, is it all going to end in tears for investors?
You would have had to be hiding under a rock for the last two years to have not heard about the rising property market.

Better still, you would have had to be living under that rock if you hadn’t seen the flood of property experts and spruikers talking about the virtues of property and why you must get in now. Just don’t say the word ‘bubble’ to them or they will froth at the mouth and you will be stuck listening to them go on about how it’s different this time and you can’t compare today’s data with the past.

I love data because it is binary – 1’s and 0’s. It doesn’t get emotional and it doesn’t have a vested interest when it presents itself. While my clients know I have had an opinion on property for a while now, I have kept to internal communications among our group but I am beginning to see more and more commentary online and thought it was time the share my thoughts.

Averages can be dangerous and, quite often, they can hide underlying problems that can quickly escalate into disastrous results. When talking to my clients, I love to provide a visual interpretation of the dangers of averages.

If you put your head in the oven and your feet in the freezer, on average, your body should be a good temperature.

We’ve all seen the charts that show that Australian property has done exceedingly well over the past four years (sorry Perth, someone forgot to invite you to the party), and Sydney and Melbourne have been the drivers of these results, as well as taking out first and second place in the returns game. What the numbers do not show, however, is that behind this rampant growth is personal finance stress at the consumer level.

When espousing the virtues of property investing, usually the first fact that is employed is the rapid rise in rents that are being charged. From an investor point of view, when trying to generate a yield, this can seem appealing. However, what happens if your tenant is stretched to meet the monthly rent and falls into default? That puts you under financial stress. Now, what happens if you own three properties and all three tenants fall into the same situation? Time to go back to my data.

One of my favourite sources of information is the Reserve Bank of Australia. Do an online search for ‘ABS chart pack’ and you will be able to review all matter of data that makes a statistical nerd like me jump for joy. Below, I have attached a chart released by them on 8 February which shows debt as a percentage of household disposable income as well as interest paid as a per cent of disposable. As you can see on the left, household debt levels as a percentage of income has risen far above those levels that we experienced before the GFC. 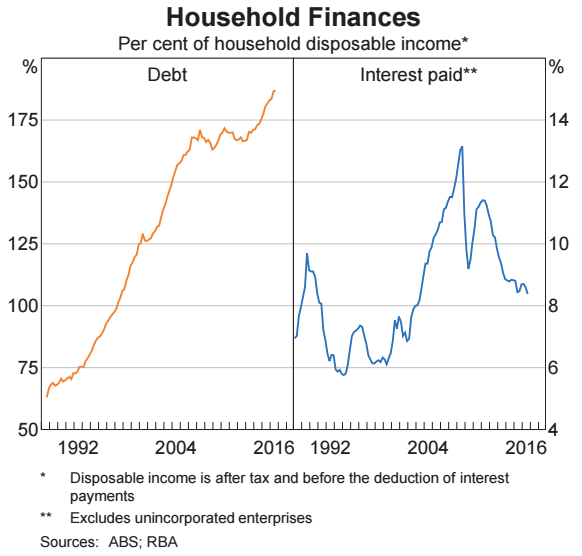 If you’re taking a glass half full approach to the chart you might say, “But look on the right – interest paid as a percentage of disposable income is back down to levels not since the early 2000s” and you’d be correct. But you would hope that would be the case when interest rates are at their lowest levels on record.

What I’m concerned about is what happens when interest rates start to rise. If households are feeling it now, what will happen after a couple of rate rises? A useful tool in determining what the markets predict interest rates will do is by looking at the fixed rates currently on offer. Back to my trusty ABS charts. 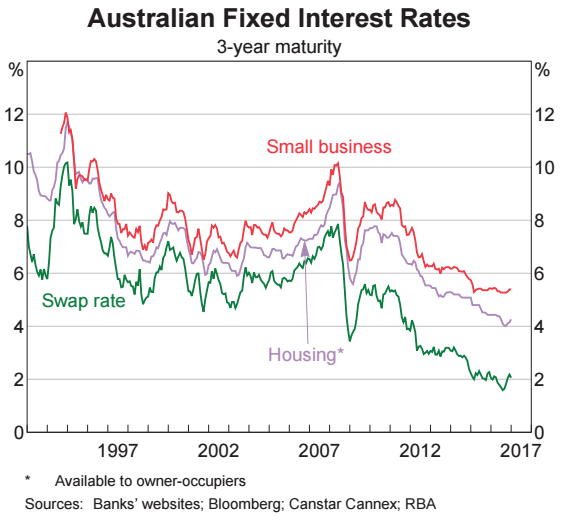 As you can see, they’re starting to turn up, which means that the money market is betting their yearly bonuses that we will see a rate rise inside in the next two to three years. So we’ve got debt as a percentage of household income at its highest level since the ABS first started collecting this data in the late 80s and forward indicators like fixed rates are starting to point to a rate rise. What’s the problem?

The most concerning piece of data from the ABS is its chart on Australian banks’ non-performing assets. What the chart below shows is that even though we have interest rates at record lows, the amount of loans that the banks provide which are non-performing (in distress or default) has been rising since 2015. Confused? I have been too. With interest rates so low, surely that number should have been going down. 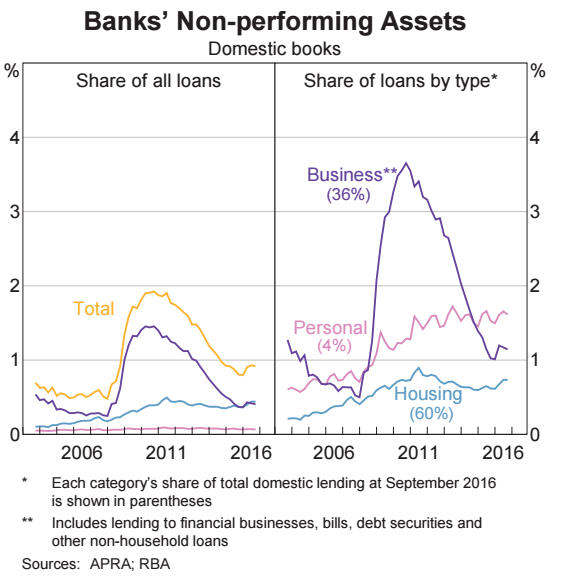 Then comes the announcement that the Turnbull government is considering watering down the capital gains tax concessions for investors.

In summary, we have:

• Debt as a percentage of disposable income is at record highs;

• Market indicators pointing to a turn in interest rates in the next couple of years; and

• The amount of loans in default rising in a rate environment that should be encouraging this number to fall.

I should say that I’m not anti-property (having held it all my adult life), but I am concerned for those who may be rushing in on the property hype at the wrong time when they should perhaps be consolidating.

This article originally appeared in a interview with NestEgg.

Atlas Wealth Group is a group of several organisations, each of which is a separate legal entity registered in the relevant jurisdictions in which they operate and licensed with their respective regulators.