Changes to the Australian Tax Residency Rules Affecting Expats – In the 2021-22 Australian Federal Budget, the government announced changes intended to amend the tax residency rules that Australian expats must comply with.

These changes will affect most Australian expats once implemented and will be based on a Primary Test as well as a Secondary Test.

The Secondary Test applies to individuals who have been in Australia for more than 45days but less than 183-days in an income year.

The test includes a test for commencing residency and ceasing residency. The secondary test would also focus on four factor tests which must be satisfied for an individual to be deemed a tax resident of Australia.

If an expat spends less than 45 days in Australia during an income year then they are classified as a non-resident for tax purposes.

However, if an expat spends 45 days or more in Australia, the factor test must be applied and an Australian expat only needs to qualify for two of the following tests to be deemed an Australian tax resident:

When ceasing residency there are a number of options that may apply to future Australian expats, all depending on their circumstance.

If you satisfy the below employment rules, you will be deemed a non-resident from the day you depart Australia:

If you do not meet the above requirements, you will need to determine if you are a short-term or long-term resident.

Spent less than 45 days in Australia and meet less than 2 factors test?
Yes – You are a non-resident from the day you depart Australia
No– you will remain an Australia tax resident 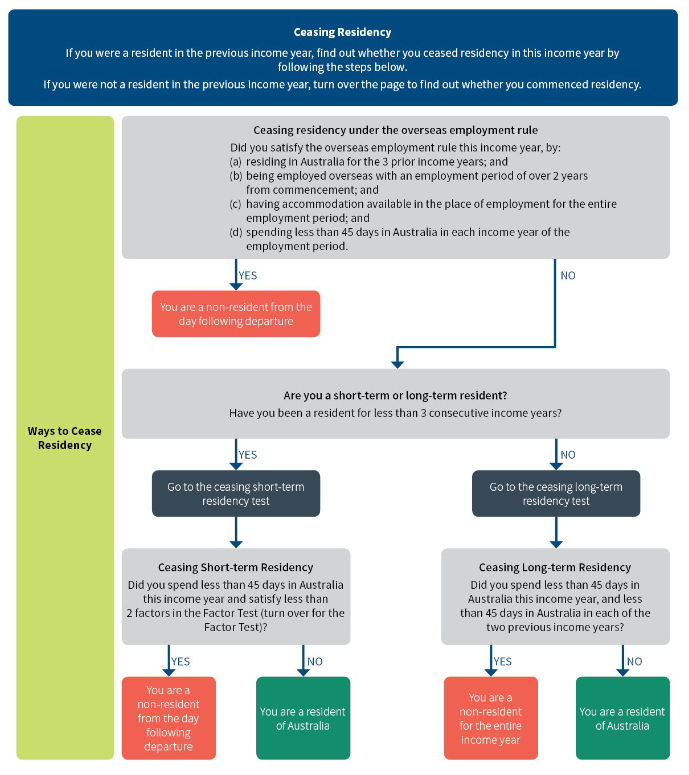 The tax you pay will largely be determine by whether Australia has a Double Taxation Agreement (DTA) with the country you reside in.

If a DTA exist, this essentially will provide a tie-breaker test when you are deemed to be tax resident of both Australia and the country you reside in.

Under the DTA if you have your permanent home in that foreign country and not in Australia for an example, you will most likely meet the test and will be deemed a tax resident of that country, and a non-resident of Australia for tax purposes.

When Does It Start?

It is important that Australian expats note that the proposed changes are not yet legislated. Although, it is likely that it may come into effect from 1 July 2022 or 1 July 2023.