How Does The Recent ATO News Affect Australian Expats With Trusts?

How Does The Recent ATO News Affect Australian Expats With Trusts – In the news last week two recent ATO tax determinations may affect Australian expats with Trusts, and specifically around non-resident beneficiaries of these discretionary trusts.

What Is A Discretionary Trust?

Firstly, in order to understand the recent determination lets do a short recap on what a discretionary trust is. A discretionary trust or commonly referred to as a family trust is a type of tax vehicle in which we can utilise to hold certain assets: such as Investment properties, Shares, Business’s as well as act as a retirement vehicle.

They allow us to distribute different types of income to the beneficiaries, which can be a normal Wife and Husband, children and other entities like a company(corporate beneficiary).

If a trust makes a capital gain or receives income it must distribute this.

If it doesn’t it is penalised at the highest rate of tax at 45% on this income. Below is an example how one might utilise a discretionary trust. 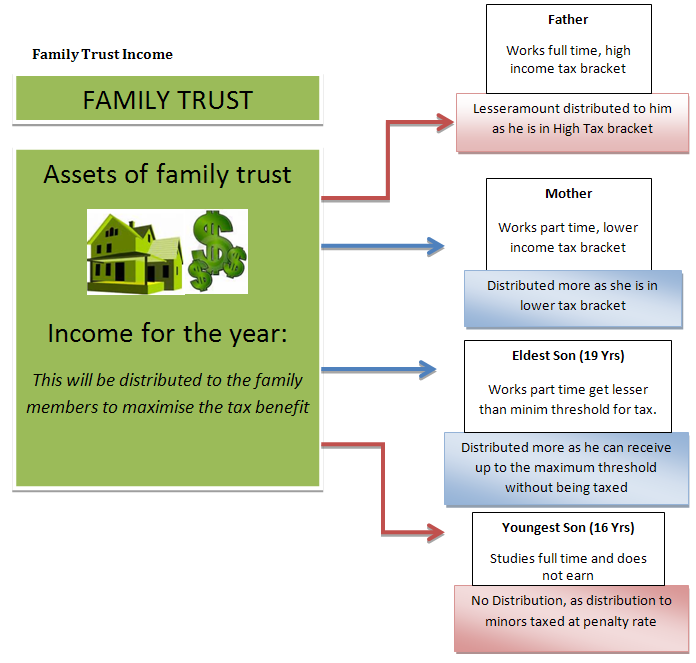 Now when we are living and working overseas, and the ATO has us nominated as a non-resident, then the tax treatment of income from the trust is very different. The recent tax determination provides evidence of this.

This first determination is about a discretionary trust which makes a capital gain on the sale of 5,000 listed ASX Bluechip shares, which were only held for a short period of less than 12 months.

The trust itself was not considered a fixed-trust and therefore the non-resident beneficiary was entitled to receive the full distribution of the capital gain.

Now what is unusual is that the non-resident had to pay tax on the capital gain of the sale of the shares. This is all due to holding these shares through a trust entity; traditionally if they had held these shares in their own name there would be no capital gains tax due at all.

When you are a non-resident the following assets like shares, Managed funds and Exchange-traded funds are considered non-taxable Australian property.

So in this instance by holding shares through a family trust back in Australia it has acted as a tax hindrance compared to holding them in their own name.

The second determination takes the above item one step further. It concludes that a non-resident/foreign resident beneficiary of an Australian discretionary trust is assessable on non-taxable Australian capital gains.

In this scenario a trust held international shares traded on the London stock exchange through a third party broker. A capital gain was made by the trust on the sale of the shares and the beneficiary was again a non-resident and this is where the capital gain was distributed.

So the extension of this determination represents that a non-resident beneficiary of the discretionary trust will be taxed on an asset which has absolutely nothing to with Australia, as well as the gain not being sourced from Australia either.

Similar to the above, if the individual held these shares in their own name they would have not had to declare the transaction to the ATO nor pay tax on the gain to the ATO.

So What Does This Mean For Australian Expats With Trusts?

These resulting tax determinations are the result of a raft of changes over the last 30+ years:

Australian Expats With Trusts Should Learn From These Cautionary Tale

The above tax determinations should act as cautionary tales for any Australian Expats with trusts or complex tax vehicles in Australia, which are being used as holding entities for certain investments.

These vehicles are great when you are an ordinary vanilla Australian tax resident but as you can see they can be burdensome when your tax residency is different.

If you are unsure if you have the correct structuring or need some help with restructuring it might be worth reviewing your current situation with a Qualified Financial Planner or Australian expat tax accountant.